Have you ever thought, that you can make your form look more tacky. For example, look at the picture below:

To can do like above. You only need the GDI + and its VisualStyles.

VisualStyles to fame in the era of Visual Studio 2005. You can find it on System.Windows.Forms.VisualStyles. VisualStyles usability is taking a picture control on windows theme that is being used at that time. For more information, you can click on this link, http://msdn.microsoft.com/en-us/library/system.windows.forms.visualstyles.aspx.

So, if you have lots of windows theme, then you can try VisualStyles you're using. For example, when I replace the existing windows theme on my pc to macintosh, it will look like this:

And when I change my windows theme to android, then it will look like this:

Take a look at, funny is'nt it.

At the sample I've included time this. I only use form theme alone. Sample so that I include quite simple. What you should know, I allow you here to change the size of each border, such as when you run, normally like this:

After that I drag my mouse down the caption, will be a red line appears like this:

On the red line, drag & drop your mouse, the size of the caption will be changed. For example when I drag my mouse until the maximum, later like this:

Take a look at, turned into a large caption from the normal. You can also move border the other, the left border, right border and bottom border. For example, I drag to another border until maximum, will be like this:

Take a look at, funny is'nt it. And as always, I hope you can make something better, more efficient of course.

This sample shows how Windows Azure Mobile Services enables you to add, update, and view a game leaderboard for your Windows Store app.

This Windows Store app demonstrates a simple trivia quiz app. It asks for your user name and shows a random set of predetermined trivia questions. After you answer all of the questions, the app updates your result in a Mobile Services table and then displays a leaderboard with your relative position among all of the quiz app players.

windowsapps/Creating an app that reads

This application is a sample for creating a Windows Presentation Foundation application that reads out our text messages, that we pass to it. The source code contains the functions and a complete application example that can be used to get audio speech in either live or offline format; in a Waveform format file.

You can build the sample using Visual Studio 2013 and .NET framework 4.5.

The above program explains how you can use System.Speech namespace to generate the speech results for your application, that can in turn provide you with a functionality to store the audio sample for sharing across network or to listen to your favorite paragraph.

Remember Windows Presentation foundation is most likely to get frozen if you take too much to execute the function. That is why the source code contains the asynchronous approach, and also contains the functions to cancel them.


Download the project, build and test it to see how it works. :)

For more, please contact me or wait for more updates.

Demonstrates how to implement an application that supports multiple windows that appear separately in the taskbar.

Many document-based applications support multiple windows, one per open document, which are displayed in the taskbar. The ALT+TAB key combination can be used to switch between the documents, but without the overhead incurred by loading each document in a separate process. This sample implements this behavior.

The startup object for the application is the Sub Main method inside a class named FormsManager. The Main method creates a new form instance by calling the NewForm method of the FormsManager class and then adds the new form to a list object. Once the first form is created, the code calls Application..::.Run to start the main application thread so that closing the first form does not shut down the process. Each document form exposes a New menu item. Clicking this menu item calls NewForm method again, which opens a new document form just as the Sub Main did as the application loaded.

Each form also provides Close and Exit menu items. Choosing Close starts the closing process. Each form has a Closing event which allows the form's code to check whether the document contents have been modified and, if so, to ask the user whether to save or not.

For more information on the System.Windows.Forms Namespace: http://msdn.microsoft.com/en-us/library/system.windows.forms.aspx

For this sample to run successfully on some operating systems (Vista or later) , it is required to execute as Administrator. For debugging application ensure you are running Visual Studio as administrator.

The main form, Form1, contains three Button controls to read, write, and create or delete event logs. Each opens a new form that collects information specific to the operation.

The form WriteForm collects the text, ID, and type for an event-log entry and writes the entry to the Application event log using the WriteEntry method.

The form ReadForm fills a ListBox control with the names of the event logs on the computer. The list is obtained by calling the GetEventLogs method, and then displaying the value of the LogDisplayName property for each log. The last ten entries of the selected log are retrieved with Entries property and then displayed in a RichTextBox control.

For more information on the EventLog class: http://msdn.microsoft.com/en-us/library/system.diagnostics.eventlog.aspx

This sample contains two forms with an Explorer-like interface: a directory scanner and an Explorer-style viewer. The files that support the two forms are contained in separate folders of the project.

Shows how you can use collection initializer syntax to create arrays and collections.

The buttons and radio button options perform the following tasks:

Have you ever wondered how the games and animations are made for apps or want to learn it to do by yourself? Then you are at the right place!
I will make a basic animation of an airplane firing missiles on a button click. This article will give you a head start. 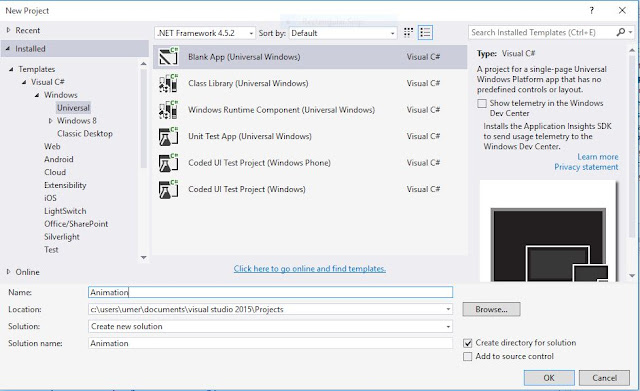 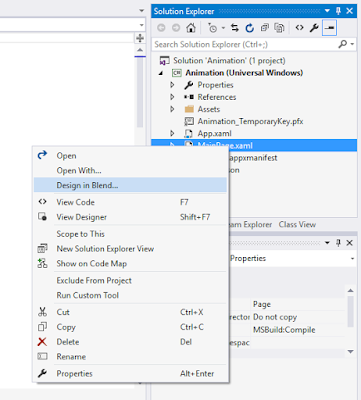 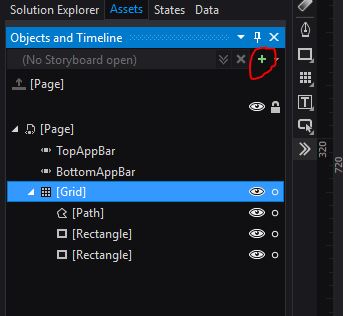 And yeah its working great! What you can do now is add some more animation or do some coding logic to make a game. Make some object to come randomly and use button to shoot them and record score for the player. After some score increase the objects as a level upgrade.

This is just a basic intro, now its up to you to explore further as much as you can.

This sample demonstrates how to use a ThreadPool work item.

Specifically, this sample shows how to create the work item, manage cancellation, and handle work item completion. For a step-by-step walkthrough of this code, see the Quickstart: Submitting a work item to the thread pool.

For more information about the programming models, platforms, languages, and APIs demonstrated in this sample, please refer to the guidance, tutorials, and reference topics provided in the Windows 8.1 documentation available in the Windows Developer Center. This sample is provided as-is in order to indicate or demonstrate the functionality of the programming models and feature APIs for Windows 8.1 and/or Windows Server 2012 R2.

Quickstart: Submitting a work item to the thread pool

Create proxies and stubs for a Windows Runtime in-process component that is consumed in C++, JS, and C#.

This sample shows how to create a component in C++/CX that's used in C++/CX, JavaScript, and C# client code.

The OvenServer project contains a runtime class named Oven, which implements an IOven interface and an IAppliance interface and shows how to declare properties, methods, and events.

This sample shows how to create an in-process DLL component in Microsoft Visual C++ that's used in C++/CX, JavaScript, and C# client code.

The OvenServer project contains a runtime class named Oven, which implements an IOven interface and an IAppliance interface and shows how to declare properties, methods, and events by using the Microsoft::WRL namespace. For more info, see Windows Runtime C++ reference.

This sample shows how to create an out-of-process EXE component in Microsoft Visual C++ that's used in C++/CX, JavaScript, and C# client code.

The OvenServer project contains a runtime class named Oven, which implements an IOven interface and an IAppliance interface and shows how to declare properties, methods, and events by using the Microsoft::WRL namespace. For more info, see Windows Runtime C++ reference.